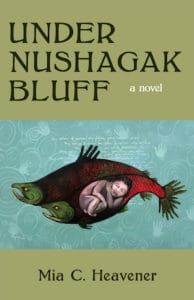 Mia Heavener’s debut novel about life in the shadow of the cannery at Nushagak Bay near Dillingham, AK, is layered with the grit and slime of salmon and the richness of life. Perhaps the most timely aspect of this book is the way it carries the shadow of the 1918 flu epidemic, which devastated Bristol Bay communities and hovers over the story like fog, un-named and murky yet so pervasive it distorts every attempt at truth. As many as 40% of people in the region were killed by the flu, and orphans were housed in the cannery in the wake of the epidemic. The story originates with Marulia, who, we are left to presume, was one of these orphans.