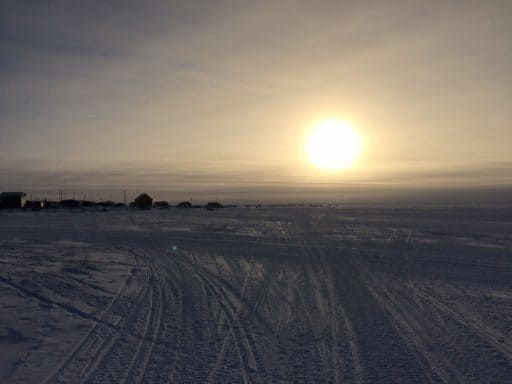 Shishmaref is located on the northwest coast of the Seward Peninsula, 123 miles north of Nome. © Elizabeth Marino 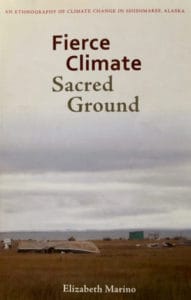 Marino isn’t from rural Alaska, nor does she live there. But she’s spent enough of the right kind of time in the community of Shishmaref, to care deeply, and respectfully, and bring the best of her academic skills to advocate for climate justice for the Kigiqtaamiut (people of Shishmaref). With this ethnography, she bridges some of the cultural gaps between the realities of rural Alaska on the edge of climate change, and the churning mill of urban bureaucratic decision-makers in Anchorage, Juneau, and Washington.

Marino begins and ends with a discussion of responsibility, and deftly brings the reader, layer by layer, to an understanding of the complexities surrounding the issues of ‘climate refugees’ in AK and the world. In discussing the significance of migration associated with climate change, she points out some pink elephants. First, she suggests that the thought of one in nine people on the planet becoming an environmental migrant is terrifying to wealthy nations (p. 7). Second, she clarifies that Shishmaref’s location virtually ensures the community’s current infrastructure will all eventually be washed into the sea, and that this is most likely due to a combination of natural causes, human development, and climate change. (Chapter 3). Third, she reminds us that flooding is not a disaster if a people have a socioecological relationship with the environment that is adaptive to that environment (p. 50-51). And fourth, she juxtaposes all of the above points with some history that might be a little uncomfortable for Westerners to acknowledge: Over the past 100 years, this community who traditionally moved to where the food was, has become rooted in a single place through a colonial combination of both incentives and coercion, and thus ‘moving,’ and adapting to changing conditions is no longer as simple as packing up one’s tent and floating up the river in a skin boat.

“Shishmaref is everywhere,” a student of Marino’s realizes: Whether you view the ‘settling’ of indigenous communities into fixed locations as a product of coercion or incentivization or the combination, settlement has been and continues to be a strategy of the U.S. and other nation states worldwide (p. 59). Selection of location depended primarily on the convenience and immediate economic interests of the governing agency, not necessarily the preferences and wisdom of locals as to where they could best sustain themselves.

Forced ‘Relocation’ is a Strategy of Genocide

I’ve heard people suggest, recently, I might add, that living in or near a rural Alaska community is a choice, just as living in New York City is a choice. Not so. Marino presents the voices of the people she is advocating for in explaining the interdependence between people, the land, and the animals that is the basis for life in the Shishmaref region and much of rural Alaska. Their knowledge is specific to this place, these plants and animals, and the region as a whole. For this community to move to a nearby town, or to a place with inadequate access to the ocean, would threaten ties to each other and the land. Thus, their input as to location is a critically important piece of the equation that tends to get overlooked by outsiders. She writes on page 96,

Who Should Read This Book

The book itself is a solidly good read, thoughtful, and sympathetic to the Kigiqtaamiut. The layout of the book feels thesis-like, and this academic presentation may somewhat limit its audience. It is well-written and engaging, however, and I hope this book is read by any outsider working with Shishmaref, or with any other indigenous Alaskan community, on issues related to climate change. By developing a better understanding of the complex history in this location, they will be more effective in advocating for the community and contributing to solutions, instead of reinventing the wheel and perpetuating the history of injustice.

Link to this review on Goodreads

This book is available for sale at our online bookstore, here.