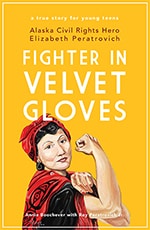 Elizabeth Peratrovich made history with her persuasive speech before the Alaska Senate in 1945. The first anti-discrimination act in the nation passed in Alaska, nearly 20 years prior to passage of Title VII of the US Civil Rights Act, largely as a result of this ‘fighter in velvet gloves’. Her son, Roy Peratrovich Jr., worked with author Annie Boochever, to highlight the role of her Tlingit culture in the development of Peratrovich’s tremendous political skill. This concise, sensitively written, historical teen non-fiction book Fighter in Velvet Gloves conveys Peratrovich’s positive can-do attitude throughout. It showcases her talented advocacy for the end of discrimination against Alaska Natives in her personal and family life, and in the halls of the Alaska Legislature. The book rightfully places her as a national heroine of civil rights. Importantly, the book also tells stories about individuals who worked alongside her, emphasizing the importance of community development in all work for justice. 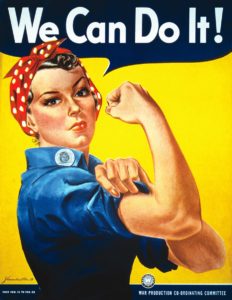 Westinghouse Electric Corporation displayed the ‘Rosie the Riveter’ poster by artist Howard J. Miller, for two weeks in 1943, as part of a series of posters intended to encourage more women to work in factories during WWII. The poster became famous after the National Archives licensed the photo for sale in the 1980s.

The brilliant cover art on the gold background comes from the featured image above, a painting originally done by Apayo Moore of Aleknagik, near Dillingham, AK, in 2014. The cover art sets the tone for the book in multiple ways. Peratrovich advocated during the same period of time as the Rosie the Riveter poster from the WWII era was on display. Moore’s original poster quotes from the landmark speech discussed in the book, “I would not have expected that I, who am barely out of savagery, would have to remind gentlemen with 5,000 years of recorded civilization behind them, of our bill of rights.” Fighter in Velvet Gloves goes on to emphasize how this skilled orator reached people’s hearts with gentle yet firmly spoken words, and this important theme of carefulness with language is emphasized both directly and indirectly throughout the book, from the front cover through the back matter.

Peratrovich’s good friend Stella Martin, Yaan da yein, called her “a fighter with velvet gloves,” writes Roy Peratrovich Jr in the introduction, and this description inspired the title of the book. Consistent with Peratrovich’s delicate choice of words before the Alaska Senate, Boochever takes a reserved approach to documenting the history of racism in Alaska. She provides clear examples, photos, and information throughout the text and glossary to help the reader understand the impact of discrimination upon Alaska Natives within their own homeland. This is particularly important for today’s younger generation, in Alaska and throughout the country, who may not be aware of the history of overt segregation. In order to understand how racism continues to function today, we have to understand what institutional structures shaped the generations that preceded us. 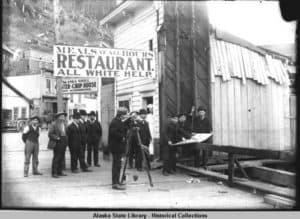 The official US policy of assimilation belied discriminatory practices defining where Alaska Natives could transact business, live, or go to school. Boochever provides historical photographs that demonstrate these blatant practices. Peratrovich first struggled to rent housing near the local school, then to enroll her children in the local ‘whites only’ school. In both efforts, she succeeded. She understood that separate did not mean equal, and that access to improved student-teacher ratios would benefit her children.

Thanks in part to Peratrovich’s early advocacy, Peratrovich’s son, Roy Peratrovich, Jr., went on to become the first Alaska Native engineer certified in this state. This connection is important to make, as it highlights the fact that desegregation enriches our society as a whole, and that it will take multiple generations to close the gap of health and economic disparities that segregation enforced. A lack of understanding of the history of segregation and how it impacted educational opportunities exacerbates overt discriminatory attitudes and comments which unfortunately still occur today.

Peratrovich led the way for Civil Rights by challenging overt discrimination 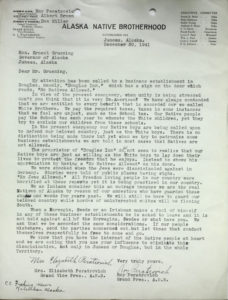 Boochever’s passion is the promotion of understanding between cultures, and she understood, as did her subject, that in order to make broad headway in a topic as emotional and complicated as systemic racism, it’s necessary to stay somewhat upbeat, and focus on rectifying a tangible, immediate problem: in this case, ensuring that this generation understands the history of overt discrimination against Alaska Natives, as well as the history of strong, intelligent, female Alaska Native leadership in the nation’s struggle for Civil Rights.

The author does acknowledge her perspective is that of a non-Native who grew up in Juneau during the years following the passage of the anti-discrimination law. She notes that discrimination was still painfully obvious growing up, even after the law passed. Boochever reports Roy Peratrovich Sr’s pointed closing remarks in 1945, explaining “how only Alaska Natives can know how it feels to be discriminated against in this, their own homeland.” She mentions the domination in the legislature of white men representing business interests, and provides useful insight to young readers by emphasizing that the first attempt to pass the bill in 1943, resulted in a reevaluation by both Peratrovich and the supportive Governor Gruening of what strategies would be necessary to succeed.

Ending discrimination and racism is our collective responsibility

After the first attempt in 1943, Peratrovich regrouped quickly and collaborated with Governor Gruening and Sheldon “Shell” Simmons to reach out to various remote communities to encourage Alaska Native candidates to run for office, and to help rural residents understand and support the Civil Rights bill. By choosing to emphasize the stories of those who fought injustice, Alaska Native, white, or otherwise, Boochever reminds every reader of opportunities and shared responsibilities to build bridges and practice justice in our communities. There are valuable lessons here, for every Alaskan, for every teen growing up in America today.

What isn’t covered is also important

Boochever never addresses the topic of assimilationist policies as strategies of cultural genocide. By relegating discussion of Indian Boarding Schools to the glossary, Boochever minimizes some of the events in Alaska’s history which contribute to both ongoing misunderstanding, and ongoing economic and health disparities between Alaska Natives and other ethnic groups in Alaska. The choice of cover also reflects a gentler approach to discussing racism.

While the portion of the original cover art used emphasizes the WWII era in which Peratrovich was active, the original full artwork from which it comes reminds us that the struggle for justice continues to this day. By limiting discussion of present conflicts and ensuring this piece of U.S. history is well-documented and understood by today’s students, she prepares students to engage in deeper and more difficult topics in the history of Alaska Native and U.S federal and state relations.

Battle of the Books! 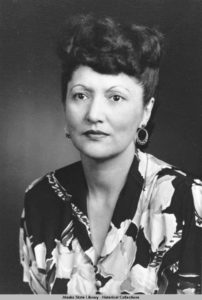 The children of our state, and our nation, deserve to understand the significance of this heroine’s accomplishments. This book sets the stage for that to happen. Boochever’s strategy of a gentle approach for broad reach has been successful in Alaska, as the tentative list for Battle of the Books for high school students coming up for the 2019-2020 school year includes Fighter in Velvet Gloves. The author intended it for both middle and high school readers, and their families, and the book is probably most appropriate for the 6-9th grade range.

The text itself is brief; there are many historical photos. Ample front and back matter nicely supplement the text in the form of an introduction, prologue, afterword, timeline, bibliography, and glossary at the end of the book. An index would have been a welcome addition. Overall, this is a tidy introduction to an often overlooked yet important element of US Civil Rights history, gently but firmly placing Alaska’s female, Native leadership on this issue, 20 years prior to the US Civil Rights Act, front and center.

To buy this book

Fighter in Velvet Gloves is available wherever bookstores are sold, especially in Alaska. Please support your local independent bookstores. You may also purchase it online at Denali Sunrise Publications Bookstore using the link below. 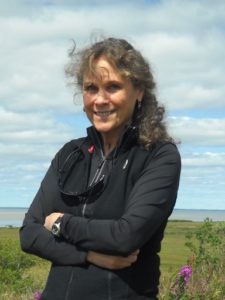 Annie Boochever is an author, musician, and educator who grew up in Juneau, Alaska. Her passion is promoting understanding between cultures. She has an MFA in Creative Writing for Children and Young Adults from the Northwest Institute of Literary Arts. Over a career spanning four decades, she has taught music, theater, and English, and worked as a librarian. She now lives in Bellingham, WA with her husband and dog named ZZ. She also wrote Bristol Bay Summer. To learn more about Annie and her work, see her website here. 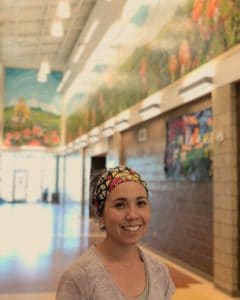 Apayu Moore is a Yup’ik artist and community activist from the Bristol Bay, AK region and lives in Aleknagik, AK with her two children. She is the daughter of Tom Hoseth of Dillingham, and Debbie Snyder of Twin Hills. She recieved her B.A. in Art/Business from Fort Lewis College in Durango, CO.

Moore’s murals can be found in communities statewide. She uses her art to advocate for Alaska Native rights through cultural exploration and community work. Apayu’s mission is to depict ‘our way of life’ which is so much more than the word ‘subsistence’ can capture, and engage the youth to find grounding in the values of the Yup’ik people to build a healthier lifestyle that prioritizes the land, water, animals and spiritual energies of our ancestors to do what is right. On a local level, this includes opposition to Pebble Mine. Recently she has broadened her work beyond her home region of Bristol Bay to complete projects with various organizations throughout the state that work toward the betterment of social justice for the Alaska Native peoples and their communities. Many of her stunning paintings of subsistence and rural Alaska are available as print art for sale online.